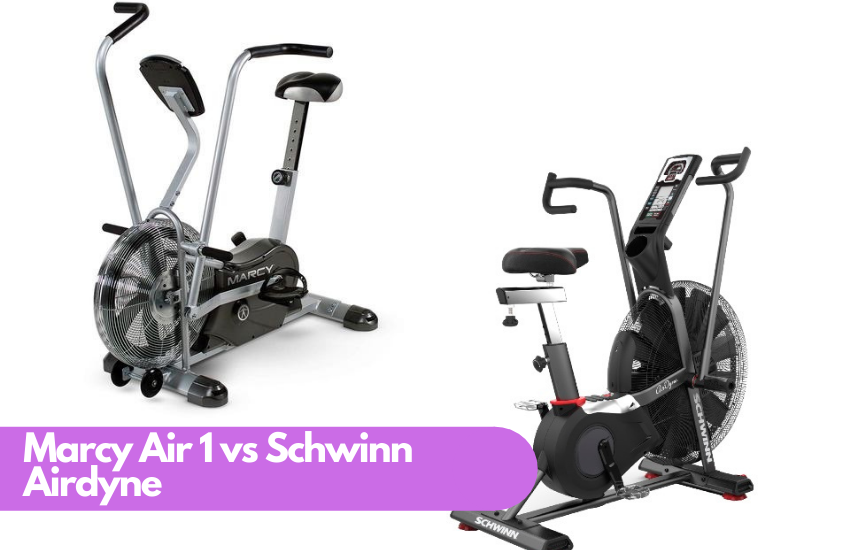 In this article, we’re comparing the Marcy Air 1 vs Schwinn Airdyne bike to guide you in choosing the best bike for your workout. We did this by looking at the key features, pricing options, and the pros and cons of each bike.

Either bike is guaranteed to give you a heart-pumping experience after use. And it is a good alternative for people who cannot enjoy the cardio workouts that the best treadmills and other machines have to offer.

But since you can’t have both the Marcy Air 1 and the Schwinn Airdyne, we wrote this article to make your selection process easier.

Main Differences Between the Marcy Air 1 vs Schwinn Airdyne

The main differences between The Marcy Air 1 vs Schwinn Airdyne are:

Comparing Features on the Marcy Air 1 and Schwinn Airdyne

Though they have a nearly similar design, the Marcy Air 1 and Schwinn Airdyne has unique features that can be spotted at a glance.

Marcy Air 1 has more steel components, giving it a sturdy look and feel. The Schwinn Airdyne bike has more plastic coverings. In the end, the Schwinn bike comes out with a more stylish and sleek finish compared to the Marcy Air 1 bike. 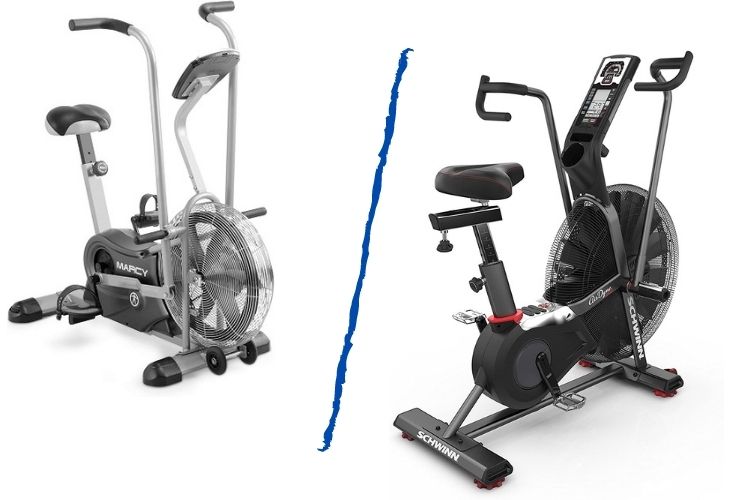 Both bikes use a wind-based fan resistance instead of a resistance-based flywheel. Their reason for doing this is based on the premise that it will keep you cool during your workout session.

The Schwinn bike is designed with plastic air vents that direct air at you. But you won’t get much cooling from it as it doesn’t prevent sweating.

The Marcy bike doesn’t have air vents to fire air directly at you, rather air is directed horizontally from the fan to circulate air around your body.

An essential component of any bike is its seat. Between the Marcy Air 1 and Schwinn Airdyne, the Marcy bike offers slightly more comfort than the Schwinn bike because it is bigger. It can also be adjusted and has an adjustment span of 12 inches.

Schwinn bike models AD6 and AD2 may provide more comfortable seats compared to the AD7 model because they have extra padding. They can equally be adjusted to suit your height preferences.

New users may find either seat uncomfortable, so we’d advise you to invest in a gel cushion to increase comfort. Or a pair of padded shorts.

However, the Schwinn bike’s footrest is attached to its arm pedals. This may cause you to feel the movement in your feet as you pedal with your arms.

The Marcy Air 1 bike is slightly bigger than that of the Schwinn bike. Its prominent display is a result of the way it boldly presents information on the screen. The bike shows your workout time, calories burnt, and distance covered. It also displays the temperature of the room when idle.

The Schwinn Airdyne bike has a smaller and more stylish LCD screen which makes it visually appealing. Like the Marcy bike, it also displays information on your speed, distance covered, calories burnt, and time. 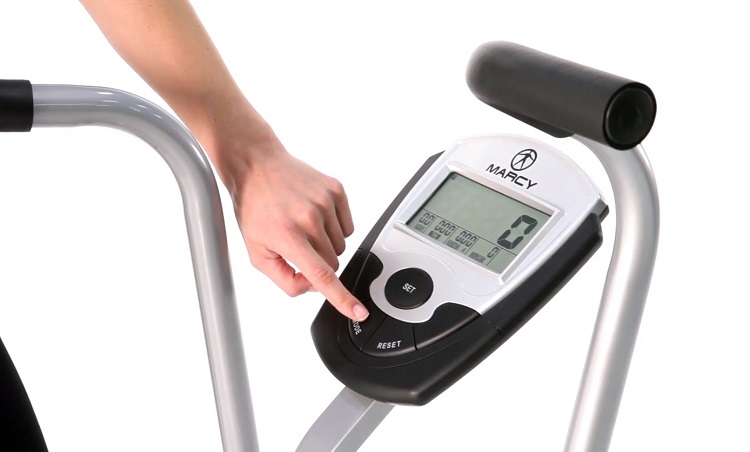 If you’re going to dip your hand into your pockets for bikes like these, then you’d want the option that offers a comprehensive warranty policy.

The Marcy bike’s warranty policy is disappointing as it only covers the frames for a period of 2 years.

The Schwinn bike offers a more comprehensive policy that covers the frame for 5 years, mechanical parts and electronics for a year, and wear items as well as labor for 90 days.

The maximum weight limit for a Schwinn bike ranges from 250-350lb. We’re giving you a range because there are a number of Airdyne bikes such as AD2, AD6, and AD7.

Thanks to the belt drive on the Schwinn bike it is mostly silent and makes as much noise as an electric fan. The noise level is low enough to use the bike without causing disturbance to your neighbors. However, it may disturb the people in your house on a very quiet day.

The Marcy bike however is more loud compared to the Schwinn bike. The reason for this is the bike becomes louder the harder and faster you pedal. There is a possibility that people in the next room will hear it during an intense workout but they may not consider it disturbing.

Except your family members are heavy sleepers, you may not get away with using this machine at night when it’s quiet. 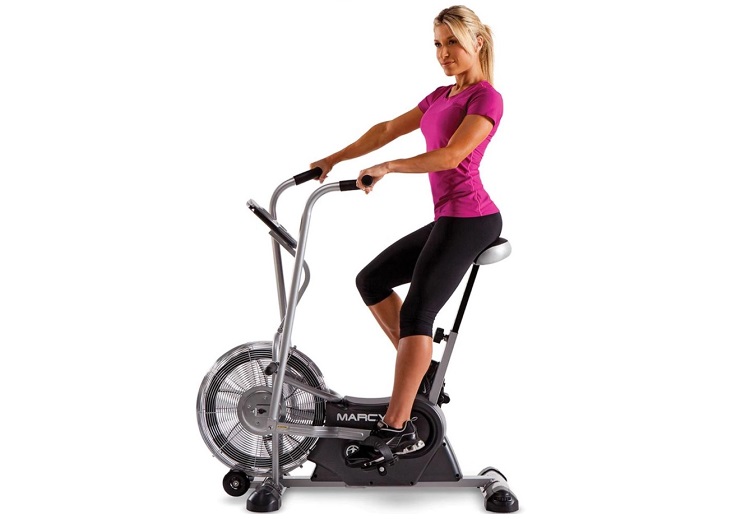 Another crucial deciding factor when choosing which bike to get between the Marcy Air 1 and the Schwinn Airdyne is the price.

The Schwinn bike is the more expensive option of both bikes. Although the AD2 model is roughly the same price as the Marcy air 1.

However, paying more for virtually the same features isn’t something we’d recommend. That’s why we think in terms of pricing the Marcy bike is the preferable option because it is less expensive and more sturdy.

Alternative Options to the Marcy Air 1 and Schwinn Airdyne 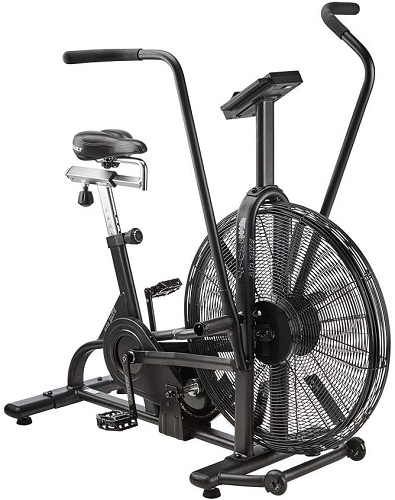 The Assualt AirBike is a heavy-duty air bike designed using feedback from athletes and coaches. It reinvents a lot of components in the traditional fan bike.

This bike is popular in the CrossFitness community due to its use in CrossFit games and sponsorship of their events. The chain drive makes it one of the noisier models and it requires a lot of maintenance.

For CrossFit trainers, who don’t subscribe to pushing yourself to the limit despite the injuries involved, add a pair of Crossfit gloves to your workout session. In the end, there’s no denying that the Assault air bike gets the job done. 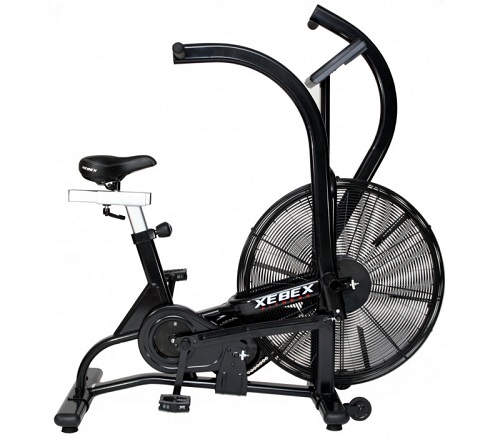 The Xebex airbike’s frame is made of high-quality parts that improve durability. The bike offers a full-body workout. The pushing, pulling, and pedaling activates a series of muscles in your arms, legs, back, and even core. Boosting the intensity of your workout and burning more calories.

The bike resistance is not machine-controlled meaning you can control the intensity of your workout. The last noteworthy feature of the Xebex air bike is the 4-way adjustable seat. The seat can be adjusted to the left or right as well as up and down to suit various height preferences. 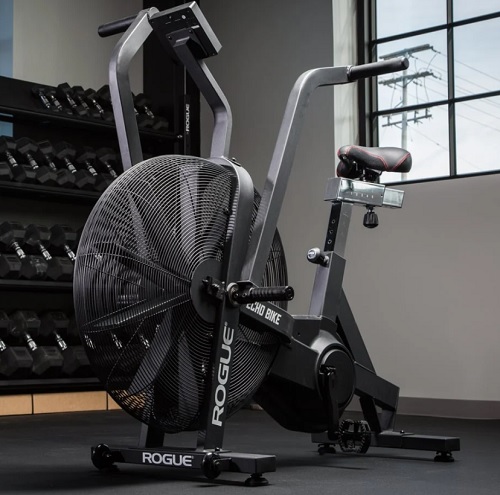 The Rogue Echo Bike is built for heavy-duty use. Weighing at 127lb the bike can withstand the strongest outbursts from athletes.

The bike offers stability, is easy to maintain, and is quick to respond thanks to its belt drive. The only downside to this bike is its beefy look. If you plan to use it in a public gym you’ll notice most users stay away from it because it looks harder to use than other bikes.

Factors to Consider Before Buying an Airbike

People looking for a moderate cardio workout as you get into shape should consider the Marcy Air 1 bike. But for others who are looking for intensive, heavy-duty training bikes then the Airdyne AD6 is a better option.

It would be a depressing situation to buy a bike that cannot support your weight. A bike’s weight limit is another factor we consider important when looking for an air bike to purchase.

Fortunately, both the Marcy bike and Schwinn bike offer a good weight limit of 250-350 pounds.

The Marcy bike is a compact piece of equipment that fits snugly into most homes and apartments. It can even be stored in a large closet when not in use. It sports a pair of transport wheels that make it easy to move the bike from one point to another on a lot of surfaces including carpets.

Schwinn bikes are about the same size as Marcy bikes making them equally compact and easy to store. They also come with transport wheels that make transporting them from one point to another easily.

Marcy Air 1 Vs Schwinn Airdyne: Which is Easier to Assemble?

Both bikes are delivered partially assembled making the assembly process easy for the user. The instruction manuals are clear to follow and the assembly probes can be completed in under an hour.

Marcy Air 1 Vs Schwinn Airdyne: Which is Easier to Maintain?

Marcy Air 1 Vs Schwinn Airdyne: Which is Better Suited for Tall People over six foot?

Both bikes come with seats that can be adjusted higher or lower to suit your height preferences.
Based on this we will say that both bikes are capable of serving tall people who are well over six feet tall.

After thoroughly comparing Marcy Air 1 and Schwinn Airdyne, we’ve concluded that the Marcy bike in our opinion is the better option.

Compared to the Schwinn bike it is more affordable, more sturdy, and offers more functionality. It’s a major downside is the warranty policy which covers only the frame for 2 years.

If you’re interested in a better warranty to secure your investment then we’d recommend the Schwinn bike. It is also a good fit for someone who is after a visually appealing bike.

To sum up, anyone after a great heart-pumping session can’t go wrong purchasing either one of these bikes.